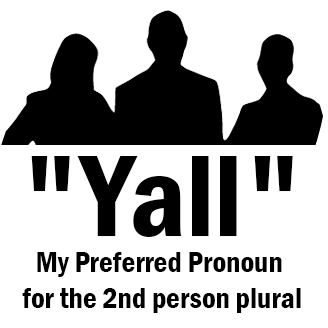 My Preferred Pronoun for the 2nd person plural is "yall"; however, the alternate variations "ya'll" or "you all" are also acceptable. The use of "you guys" or "you gals" is only acceptable where the self-identified gender of all included in the party is verifiably male or female respectively. The use of "yawl" or "you people" is completely unacceptable do to their history of racial and socio-economic abuse and should never be used in good conscience. I also find the use of "you" in the plural to be offensive as it is often used to deliberately avoid the issue of my preferred pronoun, and leads to confusing grammatical situations.

Regardless of your perspective on the proper use of the English language, thanks to SE's new policies regarding Preferred Pronouns, I henceforth expect all SE users to address me thusly. Thankyou.

What does "- Reinstate Monica" mean?

The sentiment that ex post facto laws are against natural right is so strong in the United States, that few, if any, of the State constitutions have failed to proscribe them. The federal constitution indeed interdicts them in criminal cases only; but they are equally unjust in civil as in criminal cases, and the omission of a caution which would have been right, does not justify the doing what is wrong. Nor ought it to be presumed that the legislature meant to use a phrase in an unjustifiable sense, if by rules of construction it can be ever strained to what is just.

All Questions Answers
Votes Newest
9 A proposal for helping users understand frame challenges Feb 7 '19
4 Policy Clarification: Asking about commercial or third-party worlds May 14 '19
2 What is the difference between [mythical-creatures] and [fantasy-races]? Feb 12 '19
-3 Can we make “on hold” less terrible? Feb 6 '19