Can I ask questions related to music making here? Music that I want to use for worldbuilding projects

TL:DR -I want to put music in my games, they are games about a fantasy world, can I ask questions about music here since the music will be used in worldbuilding projects?-

I wanna travel to the USA and to do this I need a job, to get a job I need new skills and to get new skills I must learn by creating my own projects, this is the fastest way to learn anything for me , taking useless things and making them artificially useful so my brain memorizes them with the least effort possible.

Two of the projects I want to put in my curriculum are videogames, two games that share the same world. I have already created the political map and I have some base of a story and a few characters in mind.

I have both some 3D assets and 2D assets and the skills to create more and I will learn how to animate them, I'm learning how to code and will be on my way to create the sound effects and music for these projects, I have already created 23 sound effects and short songs (less than 1 minute) but I plan on creating longer soundtracks.

That all depends on whether the questions you are asking are about building a fictional world or not. If you demonstrate worldbuilding purpose, and your question is otherwise a good fit for this site (not too broad, not too opinion based, etc...), then we're pretty open about the types of questions we allow on this site.

If you're unsure about whether a question is a good fit or you would like help revising a question before posting it to the main site you can always use the sandbox to get feedback.

That it's about building your world and not the game itself. That's quite an important distinction to make.

In the case of a game, I think it could happen if you make the music intradiegetic to it. In other words, that the music heard by the player can also be actually heard by characters. This make the choice of instruments important to your world on-top of the game, therefore on-topic. To give an example I've seen lately is the animation vs Minecraft video. It uses this kind of musical approach to introduce the fight ^^.

Another way of putting this is starting from music that could be played in your world, then use these as the bases for your music. E.g. : I have this village of people, what kind of music would they play (then, use the answers to make your own music in the same style).

There might be other cases I can't think of, in which case testing in the sandbox can be a good idea!

You might want a look at game dev and music stack-exchanges. The first is dedicated to video games, so anything that relates to fitting music to a game (integration, matching pace, specific tools like Wwise or FMod...) would be a very good fit. I don't know much about the other, you might find some interesting things related to music composing in general. I would ask first on their meta for more details.

Side-note of my perspective

Since you're learning both animation, soundtrack and coding (and most probably game/level design!), I guess you're either a new one in the industry or a game designer. Or both 🐶. In any case, widening your skills is a good thing, especially if you can build up things to show at the same time. Remember however that there are other ways to fill up your portfolio than making all of your projects alone.

Game jams are a quite good example of this1, and you might want to look at local jams to find people who can fill the skills you don't necessarily have. Or if you are at a videogame school, taking some good time to polish your end-of-year project + internships can give some very serious results later on.

Why do I tell this? First, All of the above examples can tell you are able to work with a team, something which is even more looked for than raw technical skills :). Also, it's easy to get all hyped on a new project, but it's as easy to get overwhelmed if you start learning everything to make it x_x. Take each step one at a time to avoid becoming drowned in work, and don't hesitate to ask people here or there when you feel stuck on something. That's all I have to say (I think?).

I've tried in the Sandbox.. but it's difficult

Anything that emits from the loudspeaker is only audible to a game player, not in your world. On WB, it is not appropriate to start about your latest game-music, proposing a soundtrack for a game or something. It will be rejected, because the music is not actually inside the world that you build. The music happens in the real world, on a player's PC. So it is not relevant.

That's why after 2 attempts involving game music, I had to invent a snail emitting a minor chord. The snail is in the forest, the music is part of my creature design.

Some variations on my snails question were put

Tortliena: " I'm making a game where there are lots of snail people. I would like some instruments to play in the game at the same time snailmen play. However, I'm stuck on the kind of instruments to give. The scene they play is for some chamanic rituals, so it's bound to be something more akin to magic, they live in medieval times and have large access to... Let's say shells. So goal is "magical" instruments made of shells. what kind of instruments would they make?"

JBHCodidact: My giant snails have the following esophageal configuration, what sounds could they be expected to make?

My two cents: I think it will not work because music is always plausible

imho, culture is vulnerable for vtc anyway, on WB. Opinion-based, almost by definition. There preferably should be one answer, for one question. Culture does not allow that often. There is affiliation with physics here, Q&A is regarded as problem-solving. Music does not really fit that format.

I feel the thing we almost always try to accomplish on WB is a plausibility-check: this forum loves "would XYZ be credible" questions, which are then answered with science-based observations about astrophysics, climate, biology, sociology, psychology.. When a question does not ask for something very specific and well-defined, it is often considered as unclear, or fishing for ideas.

Note 10-3: thanks again @sphennings for all the feedback. As the Sandbox is no place for persistent submits, I'll put the definite version here, 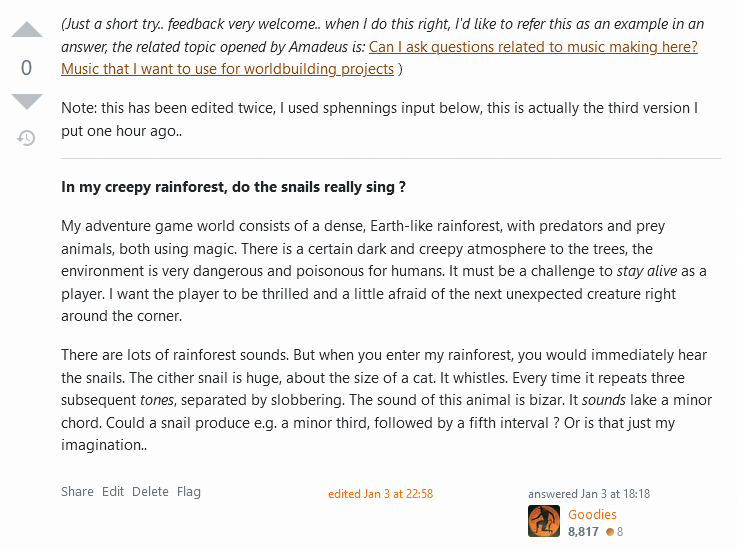 Here's the hard part: music in a game is entirely about the user experience. But that's not a perfect judgement. After all, if you asked "what sound would my armored foot make when it comes down on a fungus that has the density of Styrofoam?" for the purpose of including that sound in the game to enhance the user experience, it would be an on-topic question.

Why? Because the context of the question's application can be entirely removed from the world you're describing.

When you asked about how to make music for your game, it was clear to me that you were not trying to reflect much about the world of the game. You were trying to manipulate the emotions of the players. In other words, if you remove the application of the music from the question, what's left has basically nothing to do with the world.

On this Stack, worldbuilding is the creation and consistent use of rules for a fictional world of your own creation. We're here to help you build that fictional world.

We're not actually here to help you build your game. It's obviously cool when we can... but it's not why we're here.

So, to express this as a simple idea: if you can't ask the question without mentioning the game... it's off-topic.

(This is almost identical to our worldbuilding-vs-storybuilding rules. If you can't ask the question without explaining something from your story, the question is Too Story-Based.)

Not the answer you're looking for? Browse other questions tagged discussion questions .

9
Create Custom Help Center Articles
7
Are questions asking for worldbuilding related terminology on topic?
15
How many questions here are really about worldbuilding?
2
Can we ask "Most efficient way to use" questions?
4
How can I ask questions related to my characters?
8
Can I ask about mythological creatures here?
3
Should we have some Guidelines to Creating Magical Creatures?
3
Is it ok to ask questions that don't have specific worldbuilding use?