Do comments sometimes cause mods to remove complete topics?

Just to be sure..

I feel guilty now, someone's question got deleted, my fault ? I feel my comment about sphenning's remarks was the cause of this deletion, not the question itself. See screenshot below, the topic was removed while I was writing a response comment.

The question had only one close vote and no minus votes, at the time it got deleted.

The first two comments are teasing, imho. Why act so impolite toward eske ? Why refer to eske as "they" .. and if my remark about it was so disturbing, why not redirect a comment discussion to the chat in this case, and leave the question intact ? eske is a new contributor, now there is no way for eske to find it back and read what went wrong.. 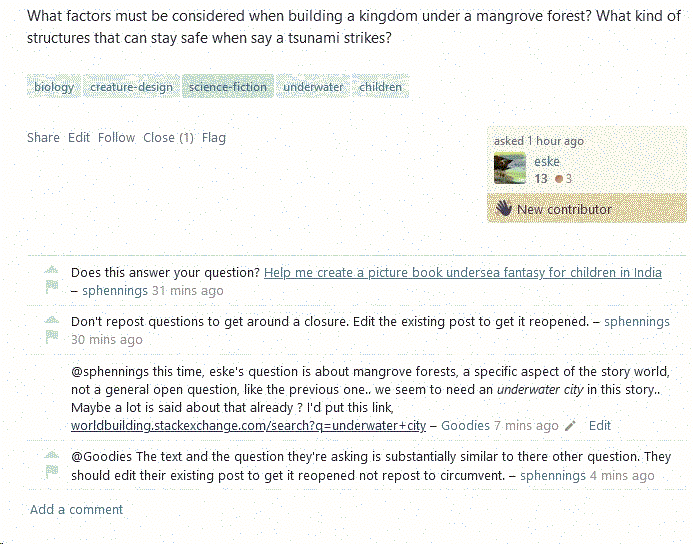 Because I am not sure I caused this mess, I would like to salvage the question text for eske to recover, it was this..

How do you build a kingdom under a mangrove forest for a children's picture book?

This fantasy is about a young girl called Devaki who lives in a mysterious world between sea and land. Rupavati, the Queen Mother rules the Coral Kingdom, after Devaki’s father and brother disappeared under strange circumstances which speak of monsters and sea creatures that guard their prison in a lava trench.

This adventure story/fantasy for children is about how Devaki finds her brother and father who holds the key to survival for the Mangrove Forest and its denizens.

The main character is a young girl called Devaki. Her mother Rupavathi comes in the lineage of the pearl-divers of Tamil Nadu. When people discover that she is an outcaste, an Irula, she is banished from her kingdom.

Rupavathi and her husband build a home for themselves under a mangrove forest. Here she teaches her daughter, Devaki, (D) to live underwater, amongst the gnarled roots and mosquito-filled fresh to brackish to saltwater – a home that Devaki loves and where she has many friends.

The Coral Kingdom is tucked into an eerily lit place with schools of fish and tides that Devaki learns to live with. She loves to navigate the tides that buffet her and the salty water that suffocate. The mangrove forest is hospitable and there are any number of birds and animals besides the fishes that Devaki gets to know and learn from. But --

What factors must be considered when building a kingdom under a mangrove forest? What kind of structures that can stay safe when say a tsunami strikes?"

In my own experience, comments do sometimes prompt people, mods included, to take actions on queries. I didn't see either version of the query in Main, but in reading the original question (the closed one) I would have concurred with the close vote. OP took such care to give us solid background; but didn't bother to learn what kinds of questions to avoid asking here. In this case, the question is woefully broad / lacking focus. 15 lines of engaging background to 2 lines of vague query is not a good thing.

I can only conjecture that L. Dutch deleted the duplicate nòt simply because it was a duplicate, but rather because it was a carbon copy of the original query posted by the OP. This is obviously an error on the part of the OP, who is new and doesn't yet know how SE works. It was done using ModHammer20K, appropriately I believe, more as a "for the OP's own good" kind of thing rather than due to any specific comments or discussion. Someone well versed in Indian culture & mangrovian civilisations could have come along and answered the cc question without realising that the question already exists but is closed. It would have been a mess! Deleting the copy simply allows said expert to (hopefully!) find the right query and prepare a good answer for when it gets edited and reopened!

Personally, storybook project & Indic culture notwithstanding, I'd like to see the OP edit this and break it down into some solid questions about mangrovian culture and society.

Obviously, I wouldn't have taken an interest if you hadn't commented and posted this query in Meta! So, that answers the general question begged by the specific.

Just to address your subquestions:

Not the answer you're looking for? Browse other questions tagged .

5
I would like to see this action as valid but have issues with it
9
Why do questions have to be specific?
0
Deletion of Comments from Sandbox?
3
Do people still need to see comments under graduated/abandoned question drafts in the Sandbox?
4
What are the criteria for comment deletion?
7
Is the "suitable dress" question off topic?
2
Is there a fine line defining a CoC violation?
31
Real Life cannot be an overriding limitation on any question unless specifically requested