What is it supposed to mean when a question is closed for need of details or clarity?

This question was closed as needing more detail/clarity. Looking at the various descriptions of this reason, I have come to the conclusion that the solution would be to edit to add more details and clear up anything that is unclear. However, with the linked question, I had already addressed every problem given in the comments, with the last edit an hour before the last close vote. What am I missing here?

(Note this is less true as of now, as the question has been edited between your question and this answer I started writing here)

The location you put something is more or less dependent on what your "evolutionary" goal is. Like how you choose that your cookies should have raisins or not : Gives a different flavor, that may or may not please everyone. Of course there are obvious non-choices which hardly benefit in any category. Well, excepted not succeeding in those, which can be a goal!

As such, if you didn't put many details, your question would have been more likely closed as being "opinion-based", as this issue would have become more evident. Indeed, by detailing very accurately, I think it was easier for people to presume your intentions, while left with some doubts here and there.

Still, that doesn't mean your description is extremely clear

Here comes a more subjective opinion. I'm bad at miximaxing words on long trails of sentences, especially when its purpose is to represent accurately one of our senses (sight, hearing, smell...). If I have hard times with that, I guess some others would have it.

In order to counteract this phenomena, I usually take an advice from an old friend of mine : Draw a picture! It doesn't need to be beautiful, just to be concise and clear. In this case, I would have gone with some "stickman" lines with some text indicating where the elements are relatively to each other, with perhaps the dimensions you envisionned. It only needs Microsoft Paint (or a vector drawing software if you lean on the "pro"-side).

Another way is to define elements each and order them from head-to-toe, and linking elements together spatially. E.g. : "There is a first set of arms below the head by around 50 cm; Their lengths are about 60cm long, where the hands are lying...". Compared to drawing, this needs some practice though to avoid writing big blocks of text which are not fun to read, though.

Of course, that's only an opinion and it won't apply to others who have a better 'words-to-space translator' or are able to focus more. And not having pictures or ordered technical description wouldn't have prevented me from giving an answer (given that I actually had an argumented one x_x), but to be honest in honesty I would have been far more confident in giving one if I had an overall view I can look at :).

(Note to readers: the question in question has been edited after this answer was posted. I am leaving the answer unchanged for reference. Please use the edit history of the question referred in the question if you feel the need.)

The question asks where to place the secondary wings of an aircraft comparable in weight to a World War 2 dive bomber. In order to be able to opine about the best place for those secondary wings, one would need to know --

No, an all-metal propeller-driven dive bomber is not at all anatomically similar to a bird. A large eagle weighs 130 times less than the aircraft in the question; and the mechanism used by birds to generate lift does not work for a dive bomber.

To give you an example, here is a famous seven-limbed dive bomber: the Junkers Ju 87 Stuka: 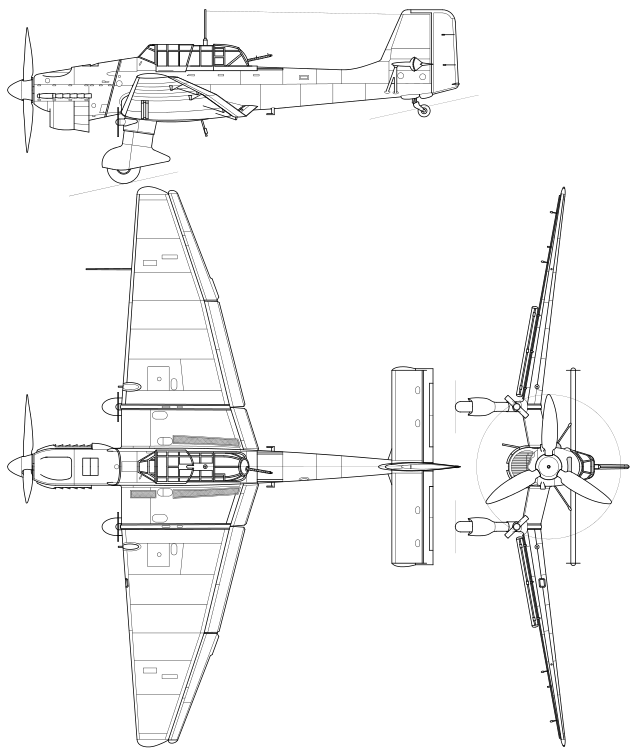 I didn't VTC or downvote, but I didn't like the question, either

First of all, I agree with @elemtilas that WB tends way too often to believe that if a question can't be answered by Real Life, then it's unworthy to be here.

As far as I'm concerned, if the question doesn't have the hard-science tag, then it is NOT mandatory that answers MUST reflect real life. The linked question has none of the science-related tags (science-fiction, science-based, hard-science) so IMO the only reasons to close would have been Stack rule violations.

Ichthys King, I'm going to be blunt. It is not my intention to be unkind in any way, but I can't think of a better way to express a frustration I have concerning the pattern of your questions. You remind me of a user from several years ago, @Muze. His account doesn't exist anymore for some reason, but he had a habit of asking any silly question that popped into his head without doing a dram of research of any kind or scoping the question for any real worldbuilding purpose. You appear to do this, too.

Is this intrinsically wrong? No, but it means you ask questions that aren't ready to be asked, which leaves respondents making too many assumptions about what you mean and why you mean it. It's messy, unorganized, and that makes your questions too often opinion-based. I spent a bit of time thinking through my comment to your question, because I was on the hairy edge of voting to close myself. But I eventually concluded there was just enough information that an answer could be had. Obviously, others didn't agree.

Why? Let's use that question as an example, you're creating a fictional creature with fictional wing structures and asking us for a supurlative condition. The "best" place to attach them to the body.

How on earth are we supposed to know? What are the rules of your world? What is the internal physiology of the creature? You've thrown out the laws of biology as we know them, should we retain the Earth's laws of physics? Why does the question even matter? Why is it important to know where the "best" place is, and what are the limiting conditions and goals for judging "best?"1 Why wouldn't any decision you, the OP, made not be sufficient?

You didn't provide any of that. Consequently, the question is too close (IMO) to having an off-topic unlimited number of answers that could justify the placement of those wings anywhere on the creature. Here are some answers that are, as written today, legitimate answers to your question:

Can you see the problem? I'm making assumptions about the nature of your world and since you didn't provide any world rules, or context, or even an explanation as to how you'd judge a best answer, each and every one of them is equally right, which is contrary to the Help Center rules that say you cannot ask questions where every answer has equal value. We permit limited lists (finite list of things), but we do not permit unlimited lists (infinite list of things).

Your questions feel too much like you're just pounding them out for the sake of asking them. You spend a lot of time on moderately relevant details (your creature is marvelously explained, other than the secondary wing placement), but never answer the question, "why am I asking this question?"

Am I wrong? I could be. I could be misjudging you something awful. It's a crime if I have and if so, you have my deepest apologies.... But if you want to avoid closures, you need to ask better questions.

A good place to start is to ask yourself these before a new post:

The answers to both of those questions would help anyone's post.

1 This is important. Asking for a superlative condition (best, worst, largest, smallest, etc.) should ALWAYS come with a specific and detailed explanation of the conditions that justify the superlative. It's actually really hard to do that, because "best" has an unconscious meaning in your head that we will never completely understand, no matter how much description you provide. Frankly, if a question can't be written without superlatives, it isn't ready to be asked.

8
Possible new 'non-reality-check' tag?
11
Close reason contradiction
14
Idea Refinement: Clarification and Examples of VTC Reasons for New Users
10
Questions about worlds with low maturity - What to do when a question cannot be answered right now?
1
I would like to know why people weren't able to understand what my question was about
1
Disputing a Policy: Question Edits Cannot Invalidate Answers
4
Closed question "This question needs details or clarity" but without explanation of what should be more detailed of clarified