in my question in here

one of the answer is merged or smashed together to the point i cant read it, is there a way to fix this? iam not sure this place is the correct place nor the word i use is correct for this.

here the image, since i think others dont get the same problem like me judging by their reaction. 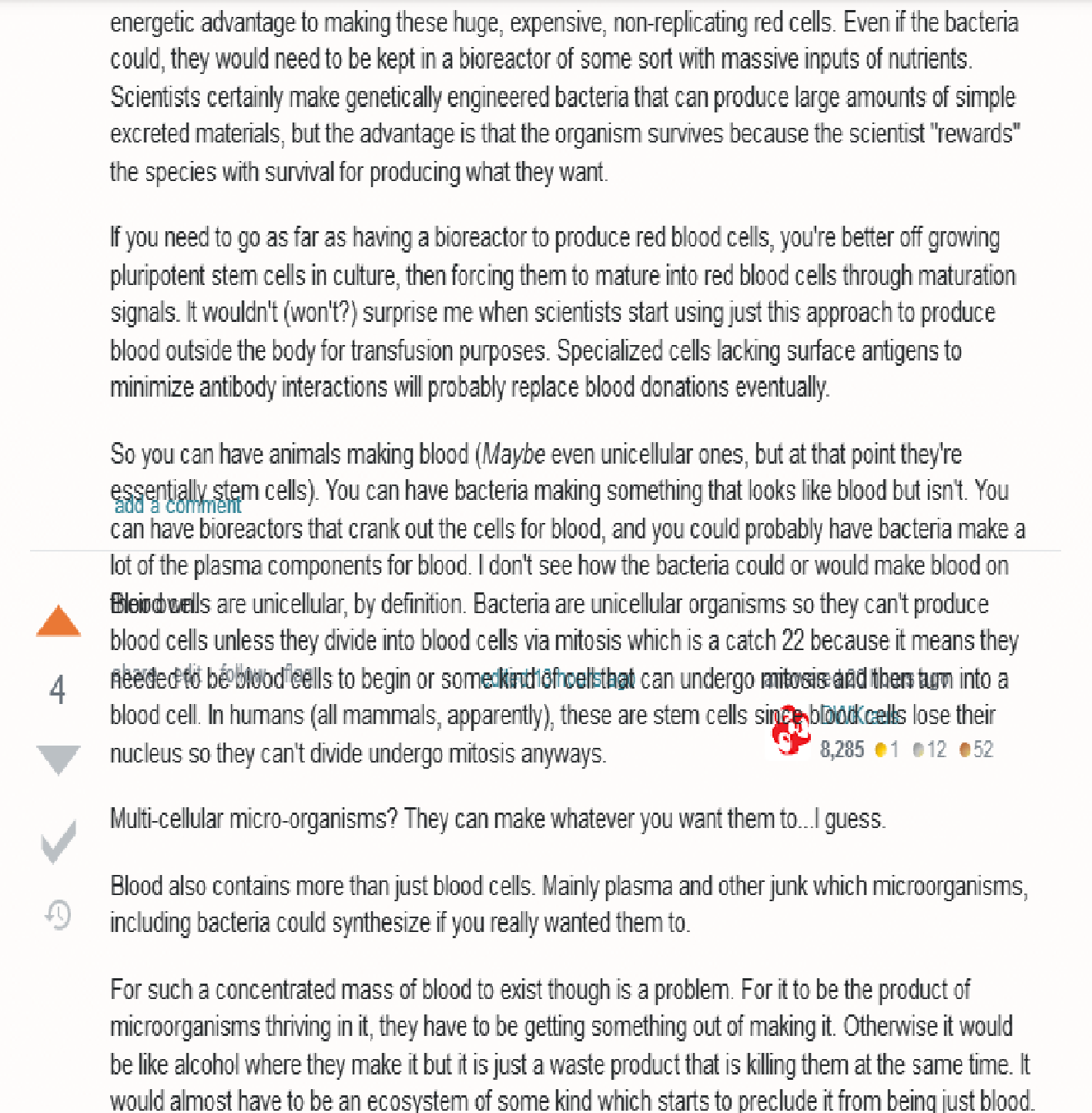 i try to refresh, close and reopen, and wait till now to see is it will turn normal or not, but nothing change while Willick answer seems to be fine.

and feel fee to edit the tag to the appropriate one since i dont know much about meta tag or how this place work.

This was caused by some specific links in an answer, when placed without markup. Only the answer containing the links was affected. I edited the answer so that the links were present with Markdown, i.e.: [link text](link url), and it solved the problem there. In order to allow for the problem to be debugged here, I am adding another answer with the text that caused the problem. Please see my other post in this question.

This is a relevant excerpt from the post that was causing a layout breakdown in Firefox, so that the problem can be reproduced and verified in that browser.

This is not as bad of a question as it seems on first glance. Red blood cells in humans don't have a nucleus. There are very few cells that don't. They can't replicate on their own and derive from nucleated red cells that have their nuclei removed. Most bacteria other than Mycobacteria have cell walls to cope with osmotic pressure from their environment. Mycobacteria (https://bio.libretexts.org/Bookshelves/Microbiology/Book%3A_Microbiology_(Boundless)/4%3A_Cell_Structure_of_Bacteria%2C_Archaea%2C_and_Eukaryotes/4.4%3A_Cell_Walls_of_Prokaryotes/4.4D%3A_Mycoplasmas_and_Other_Cell-Wall-Deficient_Bacteria#:~:text=Examples%20of%20bacteria%20that%20lack,to%20build%20their%20cytoplasmic%20membrane.) are often intracellular parasites and tend to have even simpler genomes than most bacteria because they are depending on their hosts for biosynthesis. So how does a tiny, super-simple cell become something immense and complex? There are also some big bacteria (https://onlinelibrary.wiley.com/doi/10.1002/9780470015902.a0020371.pub2) but these tend to be highly specialized to exotic environments. For something as small and simple as most bacteria to make a red blood cell, they would need to work as a team. Many bacteria can organize themselves into multicellular structures that seem to carry out more complex tasks, but are generally not considered truly multicellular (https://blogs.scientificamerican.com/lab-rat/bacteria-with-bodies-multicellular-prokaryotes/).

The biggest barrier in all this to having bacteria making blood is energy. The bacteria would not have the genome to make blood, or the manufacturing capacity to do so, but most critically there is no energetic advantage to making these huge, expensive, non-replicating red cells. Even if the bacteria could, they would need to be kept in a bioreactor of some sort with massive inputs of nutrients. Scientists certainly make genetically engineered bacteria that can produce large amounts of simple excreted materials, but the advantage is that the organism survives because the scientist "rewards" the species with survival for producing what they want.

Not the answer you're looking for? Browse other questions tagged bug .

3
My recently asked question does not show up on the active page
2
What happened to my comment to the question about merfolks' handling of their dead?
1
Could the mods check this out - did I just cast two consecutive close votes on the same question?