Should we distinguish between “science fiction” and “sci-fi”?

This recent question, reality check - How big could a space-ship get while still being plausible? - Worldbuilding Stack Exchange, reminded me of the difference between real "science fiction" and "sci-fi".

Science fiction takes a simple concept (ideally a possible event, but blatantly impossible can work too) and asks what if it actually happened? The resulting story is about the reactions of society and/or individuals to that speculative change.

Sci-fi is simply a normal, main-stream story that has been transposed into the tropes and memes that have become a standard part of science fiction. The story itself is not science fiction.

This science fiction versus sci-fi distinction isn't recent. 70 years ago, Galaxy Magazine was founded on this basic premise: 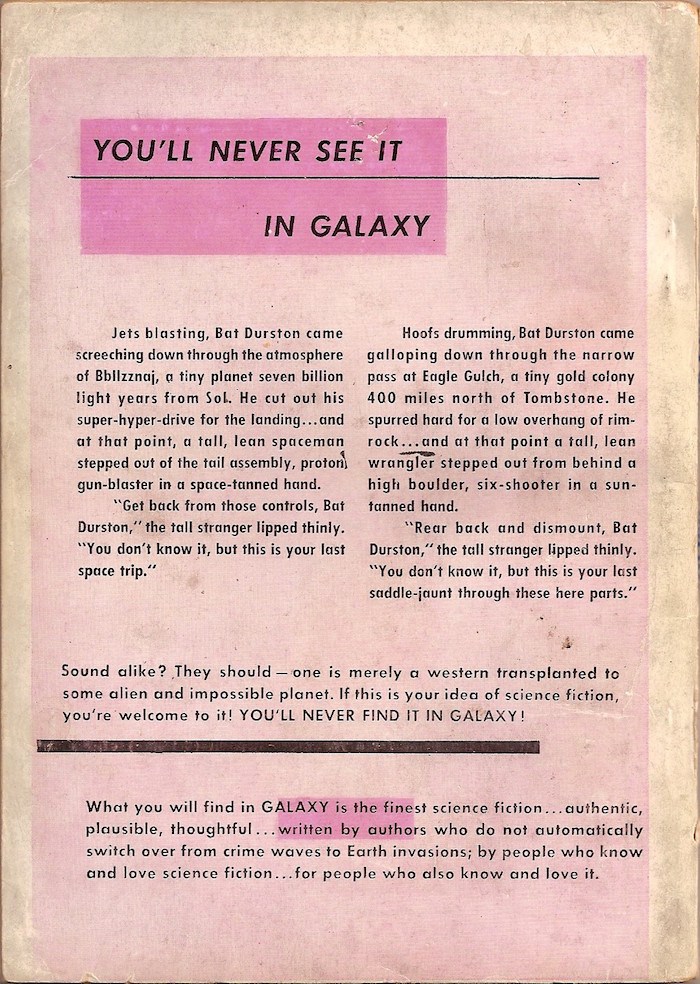 As author Spider Robinson said, there is science fiction, and there is sci-fi, the plural of scum fum (or perhaps scus fus).

I realize it would be a big job, and is unlikely to happen, but it would make things a lot nicer if questions distinguished between science fiction and sci-fi.

I remember one of Isaac Asimov magazine editorials giving a very disparaging definition of "sci-fi", but can't seem to find it anywhere. And almost all the items I did find ended up referring to Asimov as a "sci-fi" writer, something that he would not have appreciated.

In Asimov quote on the crucial essence of science fiction, he stated:

What is important about science fiction, even crucial, is the very thing that gave it birth — the perception of change through technology. It is not that science fiction predIcts this particular change or that that makes it important; it is that it predicts CHANGE.

This crucial factor is something that sci-fi neglects; it doesn't care about how technology changes society, it only cares that society has changed, and simply makes use of that setting.

Admittedly, by now the distinction between "science fiction" and "sci-fi" has all but disappeared, at least in terminology, but that is the real problem here. When vocabulary changes, especially when distinct words become synonyms, meaning gets lost.

The comments given so far make several observations, each of which misses the point:

Yes, these are all important issues, and they can apply to both science fiction and sci-fi, but they are unrelated to the definition of "real" science fiction.

The text you quote (in the image) doesn't seem relevant at all. it just makes the claim that Galaxy will have what its author considers "quality content", but doesn't make any point about the distinction you are drawing between "sci-fi" and "science fiction". — terdon

No, that is exactly what it doesn't say. You are completely missing its point.

If you think 1984 is a story about things that happen to a man while working for a government agency, you didn't get it. 1984 is about something far deeper and broader than that; it is about society, about the need for war, about Stalinism, about truth, and about many other important ideas. But those ideas could be expressed only as an allegory using the techniques of science fiction; it simply wouldn't work as a mainstream novel.

That is what makes something science fiction; not the apparent genre, but the necessity for that genre.

The quoted article, 'It drives writers mad': why are authors still sniffy about sci-fi? | Books | The Guardian, is about authors that write science fiction and then deny that what they have written is science fiction. It's an excellent illustration of my point.

There is a good reason they do this, and that reason is directly related to the (current lack of) distinction between science fiction and sci-fi.

Consider an analogy. Suppose your knowledge of Christianity comes from such experiences as choir masters with Roman hands and nuns that rap knuckles with rulers when you don't follow their rules. You also learn about the Inquisition and Crusades as part of the history of Christianity. Later in life you happen to read the Bible and discover some amazing philosophical insights. But when you describe your new ideas to someone else, they tell you "yes, that's what Christianity is all about". "No," you say, "that's not Christianity, it's something far better than that!". The concepts you have developed are so much better than what you have come to think of as Christianity that they can't possibly be Christian.

The same thing happened when Margaret Atwood discovered that the best way to express her ideas about society, women, religion, politics, etc. was to use the devices of science fiction to build her metaphor. She of course didn't recognize it as such, because her past experience with that genre was with crappy sci-fi films and stories of, as she said, "monsters and spaceships". She must have thought: "This couldn't possibly be science fiction, it is so much better than that nonsense. Don't insult me!". But in fact she had written science fiction, she simply couldn't admit it because she didn't know that real science fiction even existed.

I know it's a lost cause, but once again:

I'll add this distinction to my list of lost words, the most egregious of which is "wherefore"'s being subsumed by "why", rendering poor Juliet's pivotal speech universally misunderstood.

I'd be inclined to vote against this, for a couple of reasons.

First: It's not clear to me that this is really a settled issue. I can find loads of folks online arguing both for and against making the decision, with at least one person claiming that this dispute has been going on for nearly half a century. Our sister site, Science Fiction & Fantasy (which, interestingly, uses scifi in their URL), has an interesting discussion on the matter, and I'm not convinced that there's a consensus - it seems to differ based on what community you ask (e.g. writers vs. filmmakers vs. movie fans vs. critics). So I'm a little bit wary of us coming down on one side of the debate.

(Plus, if we were to end up doing so, we'd almost certainly have debates on the great majority of posts that refer to "science fiction" or "sci-fi", and nobody wants to go through this whole argument again and again and again. . .)

This leads into a second point: The average person almost certainly assumes that the two terms are synonymous. Yes, I admit that very few people on this site in particular fit the description of an "average person", but still - I'll bet my hat that ~90% of folks trying to use one of the terms will "misapply" it if we claim that there's only one correct way to use each term. I think this is a case where expected user behavior should strongly determine policy. Seems a bit pointless to expend so much lot of effort on policing that arguably won't succeed.

Finally - and this is something I've only come up with after trying to wrap my head around the nuances here for a day or so: put bluntly, what's the point? Sure, we all want clarity and precision in posts, but I don't see this leading to clarity or precision - precisely the opposite. A question asker never just says that their universe is a "science fiction" or "sci-fi" setting; they give many more details, and those details are the key ones. Correcting this term won't make posts clearer to answerers, commenters, or casual readers because that term doesn't encapsulate the information they need to know.

One problem with this is that "sci-fi" (or even "SF") is simply the abbreviation for "science fiction".

Sci-fi is a very broad genre that can cover anything from hard sci-fi to soft, to science fantasy to space mystery to speculative fictions of various kinds. And of course, each also has its common and high literary variants! In other words, the two terms are tautologically synonymous.

What Galaxy is promoting seems to be something more like hard sci-fi or at least literary sci-fi. (It's been a while since I've read Galaxy, so I could be mistaken there! I'd have to poke around for a copy to see.)

I argue that this is a distinction without a difference and is a can of worms best left unoped, Pandora! Consider for example this article about Machines Like Me. The author stamps his foot and says "it's not science fiction" when it's obvious that what he's writing is in point of fact sci-fi.

All due respect to the world famous Canadian author Arachnid Saxicolinas, but the difference he proposes is silly.

The querent edited the question to clarify that in their opinion,

"There are stories that can be told only in a science fiction setting. Consider classics such as The Invisible Man, The Time Machine, Frankenstein, Brave New World, or 1984. These novels are pure science fiction: their plots require the science fiction genre."

This is patently, blatantly, obviously false.

Marketing: the action or business of promoting and selling products or services

I've been in marketing a long time. The above definition is the polite definition. Here's one that might be more accurate, if not more precise:

Marketing is the act of convincing someone your product is the right choice even when it isn't.

Galaxy magazine wasn't espousing an established definition — it was marketing itself through elitism. "Buy our product because it's the real McCoy!" It's a marketing tactic that's a whole lot more popular than you might think and one of the foils of the movie Kate & Leopold ("If you eat his margarine maybe your hips will shrink and he'll come to your door.")

The entire argument is daft to me. I remember an old Dragon magazine that had a comic strip pointing out a basic fact. It never matters if it's a blaster or a Wand of Lightning - the story is the same.

And the story really is the same. a "what if?" story examining the reactions to that speculative change will always rely on one of the seven basic plots no matter what anybody says or thinks.

My family ran a micropublishing company for seven years. We read tens of thousands of manuscripts. Believe me, there's no discernible difference between "scifi" and "science fiction" other than in the eyes of people who want to argue about it. In fact, you'll almost always find a "boy meets girl" subplot because subconsciously we know that no story will sell without a little sex — and the story isn't science-fiction-vs-scifi just because someone changed it to "boy meets fembot" and tried to examine the pathos behind disassociative relationships.

Conclusion: I believe there's no value whatsoever to implementing this recommendation. I'm firmly in the camp that there isn't even a consistently objective distinction.

1
Are questions about the development between world building and creative writing off topic?
2
Should we keep the “sci-fi” tag?
5
Should Science-Based henceforth actually be science based?
5
What is the difference between a science-based question and a science-fiction question?
6
Example of science-fiction not science-based
8
Is there room in WorldBuilding for asking about the feasibility of science fiction ideas, which don't relate to building worlds?
1
What should be the tag wiki for [science-fiction]?
5
Should we include socio-economic “worldbuilding”?