Voting behavior: upvote vs upvote & downvote. How do you feel about it?

On a recent answer a user made the following point:

-1. It's not about you or your answer (which is actually good). It's just that X's answer is just so much better than yours; better as in more grounded in historical observations on disasters and references.

When it comes to voting, our help center states

Voting up a question or answer signals to the rest of the community that a post is interesting, well-researched, and useful, while voting down a post signals the opposite: that the post contains wrong information, is poorly researched, or fails to communicate information.

While reaffirming that votes do not require motivation and they are perfectly anonymous, how do you feel about this usage of voting: upvote and downvote to widen the gap between the good answer(s) and the less good answer(s)?

For starters, let's call a spade a spade here. Downvoting an answer because you liked another answer better is not only mean-spirited, it's contrary to this website's whole point. It's not about your opinion, it's about everyone's opinion. You don't get to decide which answer is right. You upvote the answer you like, other people upvote the answer they like, and if your answer get outvoted, too bad. That's how democracy works. Rigging the system by using an exploit and then justifying it by saying 'Well it all ended how I liked' only makes it worse. You are doing a site a disservice by exploiting the rules like this, and if this keeps up, we'll have to make new rules and restrictions to prevent exploits from taking place. That would be bad, and none of us want that. So, for the love of those of us who like having nice things, please under no circumstances should you ever downvote an answer because you like another one better.

I'm going to propose a novel approach and suggest that there exists a third and fourth possibly for downvoting - you downvote without saying why and don't get flak from the meta, or you downvote and say why and you do not get flak from the comments. I typically don't explain my downvotes in the comments, or I'll leave a comment explaining why I didn't like the answer without saying explicitly that I downvoted. Shockingly, I have yet to be called out on this behavior. Why? Well, because I don't downvote like a jerk. If the answer contains factually incorrect information or otherwise contains contradictions which doesn't answer the question, I'll downvote it, sure. But, the fact of the matter is, for all the downvotes I've cast, I've never felt that I ever got heckled about it, mainly because (as I said) I don't downvote like a jerk, I downvote as a cold decision.

I don't have ironclad rules on the subject, because I do think that downvotes need to come with user discretion, as with a lot of things on the site. That's also why I'm not going to propose a strict set of rules, but here's a good guideline if you need one. If people get mad whether you do or don't explain yourself, maybe it's a sign that it's not them that's a problem, it's you that's the problem. Justifying a stupid downvote by saying 'well, you get mad either way' isn't a justification.

Problem: the comment in question seems to have been deleted or removed, so I have no context to go on.

Assuming that all is as stated, it's very simple: that particular user is being a monosyllabic word that rhymes with Warwick. It's not an "illegal" vote (there being no such thing in SE) but it is unsporting to the second respondent because the answer is actually good and it is utterly useless to the community, because it gives us a skewed perspective of what is otherwise a good answer.

My opinion: The best uses of the upvote is to show support for a) what you deem to be a factually good answer and b) what you deem to be a creatively good answer. The best use of the downvote is to show that the answer is a) substantially inadequate to the task (e.g., it doesn't take into account all 16 caveats) or b) demonstrates some odious or atrocious behaviour or mindset that really doesn't have a place here (needless, gore, sex, violence, hatred, abuse, etc).

shrug We just move on.

It's an abuse of one's voting privilege to downvote an answer that is reasonably demonstrably good a/o creative. If you don't like the answer, but it still does the job, there is no appropriate rationale for downvoting it.

As for the other sub-issues: I really don't care if other users give me grief in comments over my downvotes. If I think your answer is inadequate or inappropriate, and I choose to downvote, I am most certainly going to spell it out in comments! If you want to take your gripe to Meta, I would say "please do!" I'd love to hash it out with you, and pepper you with examples of why I think your answer sucks, or why it is you're behaving like a disyllabic word that rhymes with troll.

I doubt there is a regular SE participant (possibly no SE participant at all) who has not been subject to the vagaries of SE's voting system. For example: I have been subjected to one respondent who systematically downvoted each and every other answer in an effort to bolster their own answer. (I've also been subject to a user who visited every answer and question I'd ever posted on that particular SE site and down voted all of them.) This brings two quotes to mind. The first is mine:

Proofs that God has a sense of humor are the size of an avocado pit and teenagers.

Finally, while serving in a pastoral role I once sought legal advice about what to do with a parent who was jeopardizing their child's welfare. The attorney's point is one that I've never forgotten:

There is no law against bad parenting — and that's a probably a good thing.

What he meant was that every parent is a bad parent at one time or another and that laws that try to force everybody into one perspective of what a "good parent" is are generally worse than having no law at all.

So, in conclusion, I leave you with the humorous wisdom of Gary Larson's "The Far Side": 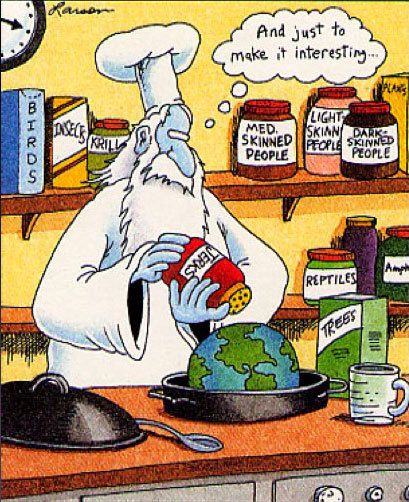 Everybody's a jerk at one time in their life (some, perhaps, more than others). Should anyone use down votes for any purpose other than to express an objective opinion about an answer's quality? No. Will pretty much anybody follow that admonition? No. So, in the immortal words of Dr. Peter Venkman:

Kitten, what I'm saying is that, sometimes, *!@# happens, someone's gotta deal with it, and who're you gonna call?

Describing the behavior as a weapon misses the service aspect to future readers. Pulling a particularly good answer up to the top can be a service, I don’t generally use the “downvote others” on active questions, but I have done it on historical questions to bump something good up once the dust settles when a whole bunch of answers are all within 1 or 2 votes of each other.

I don’t think it is good behavior on active questions.

Voting is a privilege not a right !

Downvoting as weapon to promote a different answer you upvote is, I suggest, a violation of the Be Nice principle on SE. I'd suggest a pattern of this behavior ought to be grounds for moderator action - a warning, then maybe more serious action if the individual persists. I do think this behavior is destructive enough to warrants a ban if the offense persists.

The argument that it's not explicitly against the rules is a false argument. It's a violation of the be nice principle and that is a fundamental rule on SE.

If an answer is reasonable, and even if you don't agree with it, the nice thing to do is vote up the answer you prefer (or none of them).

If an answer has a fundamental flaw (in your opinion) then it's legitimate to downvote, but downvoting in the "nuclear option".

Two deep flaws with the argument of those promoting downvoting-as-tactic, IMO, are :

I'd suggest that adding a comment explaining the weakness you see in a post is the correct approach (or voting up a comment that already says that). It is extremely negative to just downvote and not explain to the poster what you think the problem is.

Note that "I downvoted because I prefer this other answer" is such a negative thing to do to another contributor and just because you prefer an answer to another does not make it flawed in a fundamental way.

While reaffirming that votes do not require motivation

Any downvote must have been motivated by something. If there's a logical reason to do with a fundamental flaw the voter sees in the question, then downvoting without explaining why achieves nothing in the long run. We must recognize also that a small minority of people will abuse any privilege they have for their own benefit (including ego).

So my argument boils down to : a pattern of behavior can indicate a motivation and that revealed motivation can be treated as a violation of the "be nice" principle if appropriate.

I'd prefer keep the people who try and post useful answers and respect others, than let them be driven off the site by people who think we're here to validate their egos and opinions and want to force their own opinions by gaming the voting system.

how do you feel about this usage of voting: upvote and downvote to widen the gap between the good answer(s) and the less good answer(s)?

A terrible idea that punishes good answers and hence punishes good posters. This is the last thing we should be doing on SE. It should be actively discouraged where possible.

Not the answer you're looking for? Browse other questions tagged discussion down-votes up-votes .

6
Are questions about how to develop worldbuilding software on topic?
18
Where are the downvotes?
17
Rules of Peer Moderation
3
Answering a Question you Closed
3
What to do if you accidentally downvote something you did not want to downvote?
0
Don't argue with comments on down and close votes, please
5
To what extent should my personal failure to suspend my disbelief justify a downvote?
1
How to fix "Unclear What You're Asking"?
12
Testing 3-vote Closures & Reopenings and the Value of Closing Questions