Who are the anonymous users?

A not-small percentage of proposed edits are from anonymous users. I'm not sure how this works. It's not Community because that would be a high level user setting that name, no? And why do an edit that way?

I suspect these are non-users of the system proposing an edit. There appears to be no minimum rep level required to propose an edit (only to have one go through without approval).

For example, here's one that just came up for approval. I don't have a problem with an edit that adds a link to a reference, though I feel that the author should choose which reference to use. My issue is that the user isn't a member of the community. 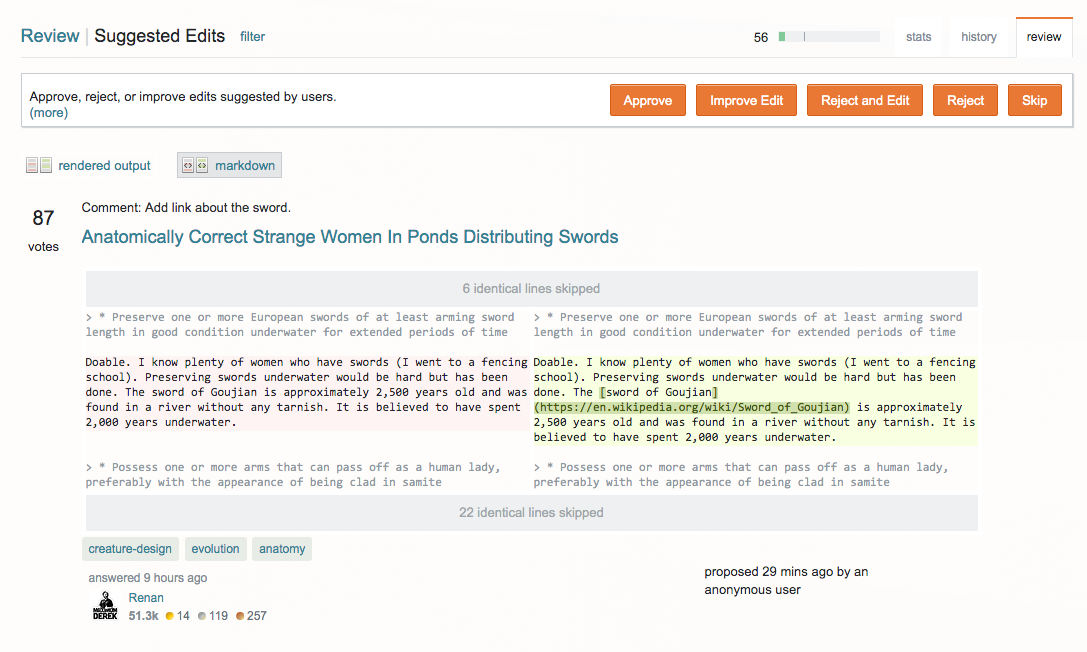 Am I missing something here? Who are the anonymous users? Could it be, say, the OP who just wasn't logged in properly? Or is it a moderator? Or is it indeed some random passerby?

Who are the anonymous users? Could it be, say, the OP who just wasn't logged in properly?

Couldn't say, it could be a user that's just not logged in to the system like you suggested.

Or is it a moderator?

Or is it indeed some random passerby?

More to the point. If an edit is a good edit, approve. If the edit is vandalism, changes the meaning, or otherwise hurts the post then reject.

The source of an edit isn't particularly relevant and as you suggested an anonymous user could well be a member that just isn't logged in...I am not sure why the source of the edit is such a concern, if it helps, good, if not, reject.

While I second James' answer, I just want to share my personal experience: I lurk most of the SE communities here, and I am registered only in a small subset of them.

However, when I stumble into a post which can clearly benefit from an edit (think of the usual they're/their/there misuse) I don't really feel compelled to register and edit.

Since I can use the "improve this question" feature, I do it (screenshot below taken from a HNT). 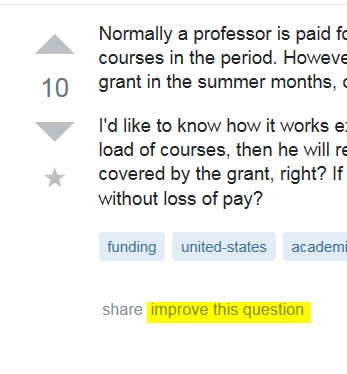 Of course I am aware that I will never receive any feedback nor reputation for my edit, I just want to do my little part to improve this place.

It would be really odd if, while I am on vacation in a foreign country, I would be scolded for collecting an empty soda can thrown on the grass to dispose of it in the garbage bin.

I saw the same edit that you saw. It was on a post of mine and I approved it.

Like James said in his answer, don't judge edits by the user. Judge them by content. Same as with any judgement on any post, as a general principle.

There's no accountability. If a user does anything (including proposing edits) that is malicious or spammy, they get suspended or banned, and anything else they've done can get scrutinized. But if an anon user can do stuff, there's no way to ban them or track it.

If you think that banning someone from a Stack Exchange site is a punishment, you have really low standards for punishments.

I make no money out of answering questions here. SE is not a social network, so there isn't socialization either. Contrary to the belief of so many SE users, specially some from Stack Overflow, genital sizes do not increase in proportion to the silly virtual score attributed to each account. What do you lose by being banished from the site? Like Eric Idle put on his best song:

I mean, what have you got to lose? You know, you come from nothing, you're going back to nothing. What have you lost? Nothing!

If I ever managed to get banned from here at the very least I might be eased from my addiction to SE's gaming mechanics. Might enjoy the free time and maybe plant a kid, have a book and write a tree.

And banning doesn't go very far anyway. We have a guy who has been banned once or twice and still managed to name themself a candidate for mod in the last election.

If an anonymous user wrecks too much chaos, I think SE can block them by IP or something. But really, with the speed we clear revisions on World Building, that is not an issue. I mean come on, I could have a handful more silver medals if people let posts stays for more than 30 seconds in each queue!

I get where you're coming from. But I wouldn't recommend rejecting an edit out of hand this way. Because someone else is just going to have to come along and clean up the mess that Anonymous already addressed.

I'd suggest using the "improve this edit" function in stead. Especially for grammatical, lexical or clarity edits -- things that don't change the question and don't alter or add potentially dubious factuality (links, etc).

When you do this, the edit will become yours. (I accidentally did this to a new user once, editing their edit, and learned that the edit was credited to me.) I see no issue with doing it this way, as what you're really doing is simply endorsing a suggestion, and lending whatever name credibility a Known User has to the changes.

It appears to be the Community

I have had one of these edits on one of my answers. It was from Anonymous correcting my misspelling of “Silver”, i wrote both Sliver and Silver in the answer.

I accepted the edit and, as i was the author of the question, it was automatically accepted. I went to check the answer i wrote and it said “Edited by Community”, meaning the Community User.

However, the Community left me a message

In the edit, i had a message that seemed personalised towards my answer. Normally when making an edit to a post, you put in a description of what you have edited, such as “improved formatting” or “corrected spelling”.

The edit description i got was “Silver not sliver ;)”. This seems like a very strange message for a bot to put in. Either someone has had to program the Community User to write that specific message or whoever wrote that was not a bot. Yet the edit still says it was from the Community user when accepted but said it was from Anonymous when it was suggested.

Look at these images below and see for your self. Take note of the date and time the Community User’s post was approved (Apr 9 at 17:24) and when i approved the Anonymous edit (Apr 9 at 17:24). 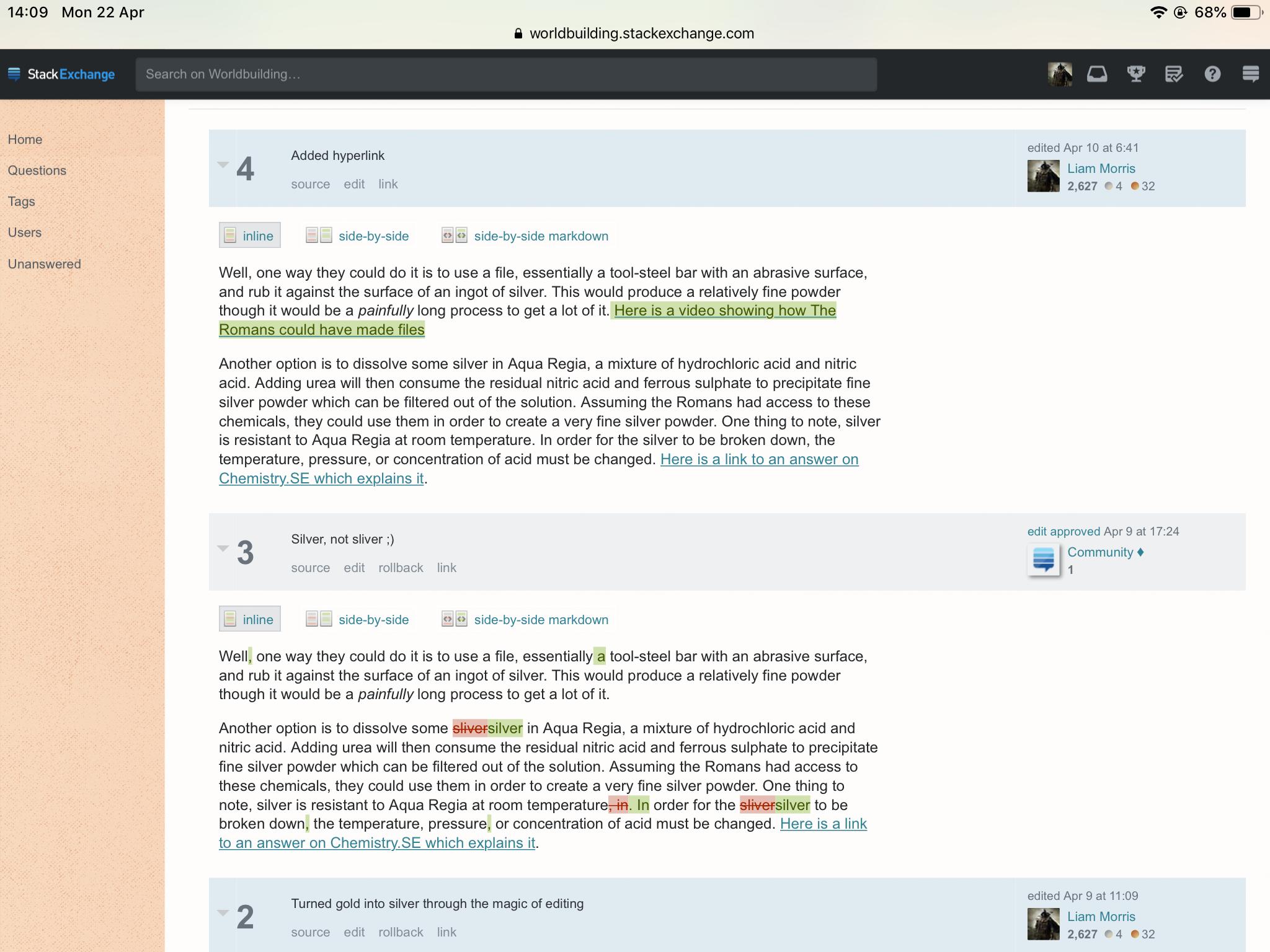 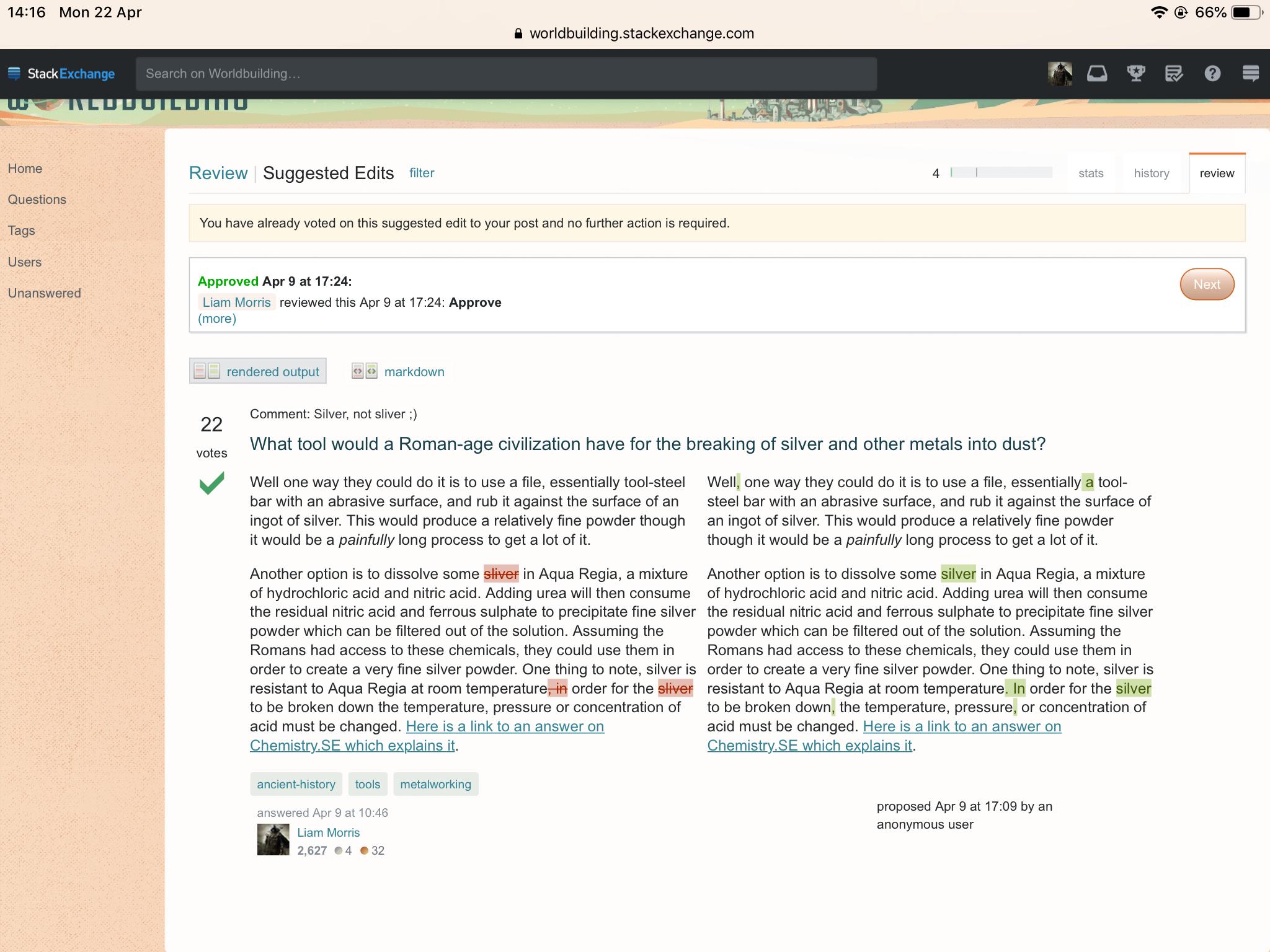 Not the answer you're looking for? Browse other questions tagged discussion users suggested-edits .

23
Nominate "Pro Tempore" moderators to help guide the site through beta
0
On topic page refers users to software related sites
3
Edits of old questions
6
Should we be adding [science-based] to questions?
9
Is there hard data on users' cliques for close votes?
10
Do we need the [idea-based] tag on Main?
4
Are we notified when someone does an edit to our answer? If not, what can be done to discover it?
9
Thousands of views on a question. Due to many users looking a few times or a few users looking many times?
2
About Inadequate questions which already have answers