Is StackExchange WorldBuilding the DYSTOPIA of the future?

I don't really see Why. My first post, I just got Bullied. Got a -1. So I will say: I don't want to be part of this community. This is just an EGO trip. The guy signs in. Instead of welcome, some instructions, you right away get a -1, no reason given. My opinion may be bad... after all am not an American, I have a distinct CULTURAL BACKGROUND. Please at least say why you give me -1. No... This is rant. You may came and gave me a thousand of negatives. But I have to ask you. Why be part of this community? I don't feel myself welcome. Stack Exchange, in general, is a bad thing. But when you qualify things outside of science, where your opinion can be verified, it turns out to be just a new form of bulling. Place an opinion that diverges from the dictatorship of moderators, and you get a negative. No sir, I'm out. Not going to give a penny on that, ever. Is this our future? to have our free will destroyed by evil corporations, such as StackExchange? We have to fight you. Not be part of this. What do you think? Probably this will get deleted anyway. We don't need to create a dystopia. This is already one.The single minded dystopia of moderators of worldbuilding, culture, history. Why should you publish a scientific paper? just go to stacksomething and get the "baked truth". EDIT: Suppose Albert Einstein were just ressurected. How much reputation would he have, to start by? and how about the undergrad student that is the number one reputation in the site? how could it not be wrong? 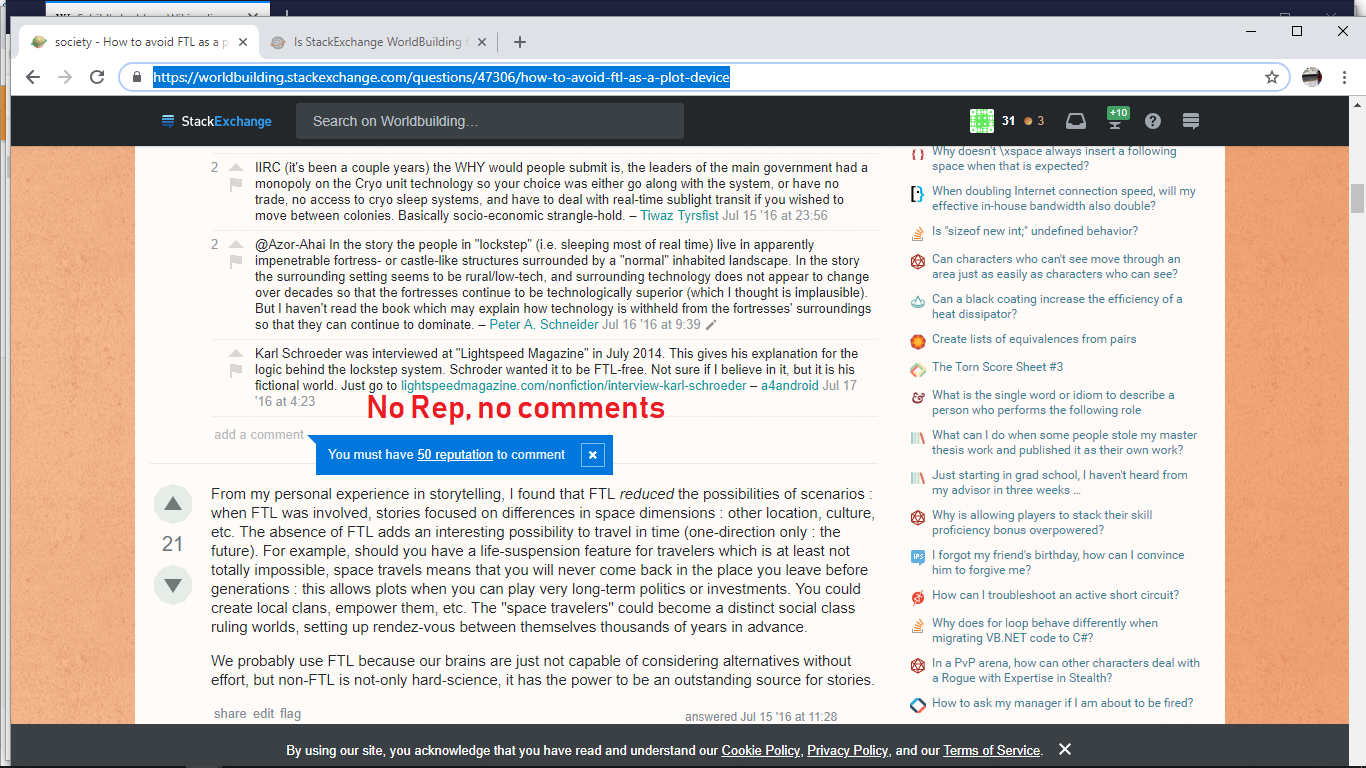 I just found this article, nailed it. It even says "how stack overflow hates new users". Imagine if the entire society was modeled after the reputation system of stack*. Just imagine. https://hackernoon.com/the-decline-of-stack-overflow-7cb69faa575d Three negatives, c'mon, it supposed to be more.

Just about four years ago, you posted an answer and somebody downvoted it without leaving a comment. That's a bummer; you can't fix problems you don't know about. But drive-by downvotes happen.

As far as I can see, you didn't make any other posts here until today, when your answer got a neutral-to-positive comment and three upvotes. Then you posted this self-admitted rant.

What is it that you're unhappy about? Is this a delayed reaction to that downvote, or did something else happen today that confused or upset you? We want users, both new and old, to have good experiences here, but I'm going to need some help understanding what you're looking for.

Using this definition of Dystopia (from Google):

"an imagined place or state in which everything is unpleasant or bad, typically a totalitarian or environmentally degraded one."

In summary, no part of the definition of "dystopia" applies to Stack Exchange, in whole or in part, so the answer to your question is decidedly "no".

Stack Exchange is an organization designed to help people find answers to their questions. In this way, it is similar to other Q and A sites. However, SE follows a strict code of conduct. On SE, there is none of the thread hijacking that you see on other forums like Google Sites. We follow a one question-one answer policy. That means someone has a specific question and they get specific answers. The most relevant answers are stored to the top by upvotes and downvotes. SE is trying to put everything in one place to make it easier for others to see answers to questions they might have too. That's why there is no thread hijacking and why there are multiple sites, each with a different specialization. The reputation is part of this. Rep encourages people to keep using the site, and it's a way of keeping the site focused and positive. Reputation is just part of the moderation, in the same way that other QA sites have some form of moderation.

Because of the above reasons, I would argue that SE is not a dystopia.SE is just another QA site trying a different approach to moderation and question asking.

My initial suggestion is this:

If you get one downvote, don't worry. Many users have a hard time getting used to the site because of its requirements. My suggestion is to try again. If you decide you still don't like the platform, that's fine. No one will make you stay, and you can find another platform to use. SE is not for everyone because of the requirements I mentioned. Nevertheless, I think this is a helpful, encouraging community, both Worldbuilding and Stack Exchange.

If you are adament on wiping SE off the face of the Earth, here is my suggestion:

Leave the site. By asking a question, you are giving people on the site something to do. You are creating more pages for search engines to index, hence more views, meaning more users joining the site. You are giving people the chance to answer, which gets upvotes (at least before it was moved to meta), which will in turn make the users more likely to continue using the site. If you instead decide to write a blog post about how unfair SE is, that page will get indexed by search engines too. Some of the people who see it and don't already know what SE is will check it out. Some of those people will join the site. Anything you do to point out the unfairness you see will only increase the activity on the site. Therefore, the most logical way to take it down is remove as many outside references to the site as possible. Deleting your profile and answers will work. I don't suggest it at all, but that is one way. No matter what you do, you will probably have very little effect on the site. It's like if you wanted to take down Google. There is not much you can do. The difference is that Google has competitors and more people who are angry at/concerned with what they do.

Worldbuilding.SE isn't the dystopia of the future. It isn't a dystopia at all. It's the most egalitarian website you'll ever find. We have clear and specific rules about what can be asked on any particular SE site and how it can be asked.

What's dystopic is that some users (especially new users) think (a) they can and should be allowed to ignore the site rules, (b) that they shouldn't be restricted while they learn how to use the site and (c) that on a self-regulating and self-moderating site that no one should ever be made to feel bad.

The reality is that the rules do a pretty good job of helping people who have no experience with the site deal with the purpose and goal of the site while growing accustomed to the enormous variety of users.

And yet few people take the time to understand any of this.

We've even tried to create a culture page to help people understand all this. Very few people take the time to read it, even when it's posted as a comment to new users.

Is SE perfect? Heavens, no! But I like it better than Reddit, Quora, and the other open-question forums — specifically because there are rules that help us establish a modicum of quality. But it's not for everyone, because it expects you, the new user, to be as responsible about using the site as me, the experienced user, because this is not a public forum.

And perhaps that's the gist of the problem. You're asking that everyone else using a site you didn't build adhere to your code of behavior (rather than you adhering to the code of behavior expected by the site built by somebody else). Life doesn't work that way — though you'd be surprised how often people try to make it that way. We live in a world that increasingly believes everybody else is at fault when life doesn't work out as planned.

And that truly is dystopic — the totalitarianism of the unprepared, the uneducated, and the unwilling to conform to the rules of someone else's house.

23
Nominate “Pro Tempore” moderators to help guide the site through beta
11
Should my writing question be closed?
10
The Stack Exchange Q&A Format and the subjective nature of Worldbuilding
5
Uninformative Edit Reasons
15
Are we bashing users over the head with rules?
25
Can we stop the Trump jokes?
14
Checklist for the perfect answer - Idea refinement
5
Know Your Site Monday: Who are the tag masters?
6
Questions with multiple answers but still flagged as off topic, too broad, or down voted
12
Testing 3-vote Closures & Reopenings and the Value of Closing Questions