Do people primarily use this site for builds or checks?

My primary use of the Exchange, when it comes to asking questions, has been to back check answers I've already tackled in my writing, is that typical or most people come here for raw advice to start building and writing particular projects?

This graphic is how I'm pretty sure people use the site: 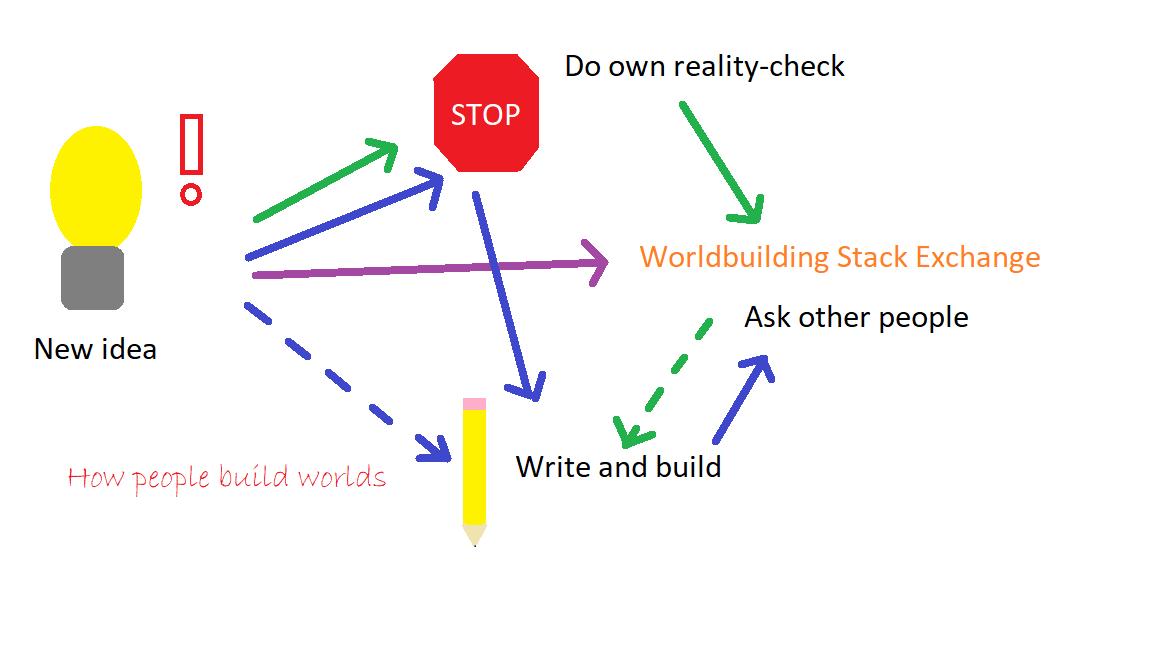 The green path is the path I typically take:

I think you would count this as a step towards building a world.

I occasionally take the blue path, if I'm more confident about an idea. I build the world a bit, and then if I have problems, I go to Worldbuilding Stack Exchange. This has the advantage that my world is usually much more fleshed out, and so I can provide more details to people. More details generally means better answers (in my experience). This sort of route is what you'd call a check of what I've already come up with.

I imagine, though, that people often take the purple path (given some of the questions I see). They go straight from having an idea to asking about it. This often results in poorly thought-out questions, which aren't great. This is another sort of build technique, but unfortunately, it doesn't always lead to the best questions. I've done this once or twice before; it's something to avoid.

A similar path to this is actually a variant of the blue path (shown with a dotted line), where a person starts building or writing without first thinking about the plausibility of the idea; they then may go to Worldbuilding Stack Exchange to figure out how well it works. I'd also imagine that this is somewhat common - not the sort of thing we want to encourage, because it would be nice if people do some of their own thinking before coming here, but still a possibility.

Everyone's going to give you a different answer to the question. My questions are pretty evenly split between your two categories. However, I would wager that, given by the quality of some of the questions, more people use the site as an intermediate step for building, rather than as a stage to check what they've already done. The margin probably isn't large, though.

I'm one of those people who prefer to get additional input if they found a "solution" to their problem and would love to have different point of view. There is always someone giving me new insights that help me in my future work and sometimes I retcon stuff after getting interesting answers. But because I mainly answer stuff for myself, often by handwaving, I don't post a lot of questions.

In general people probably don't start here without having established anything

The site is not really great for discussing questions like "Where to start when building your world?". You are supposed to ask for stuff that can be answered. Therefore most people who come here probably have some sort of framework or structure they already established and ask for aspects about their story.

You can see some of the reasons for why people are on WorldBuilding.SE in the Meta discussion Why do YOU hang out on Worldbuilding?

18
Why do YOU hang out on Worldbuilding?

11
Do questions HAVE to be for some greater cause?
7
How can we make magic-based questions as interesting to answer as the various levels of science-based questions?
2
Asking for/providing ways to make something believable and/or entertaining, rather than scientifically accurate
12
What are the core principles of worldbuilding?
8
Should we close "must magic be tied to medieval tech?"?
9
Should we have some sort of chat sessions?
14
Catalog of Question Types
2
How and why is my question too broad?
2
How to make people actually look before asking?