Can post notices on the hard-science tag actually do something?

Lately, answers that don't meet the requirements have been receiving post notices. But that doesn't do anything other than leave an "official" comment. The answers are still upvoted, and still distracting from the more useful answers.

Could answers on the hard science tag that have a post notice be moved to the bottom of the page? They would still be visible, and the OP would still be able to improve them if they wished to do so. But that way they wouldn't be obstructing the more useful answers.

This is one of those areas where a topic breaks the model a bit.

For questions, we have essentially two axes for voting: 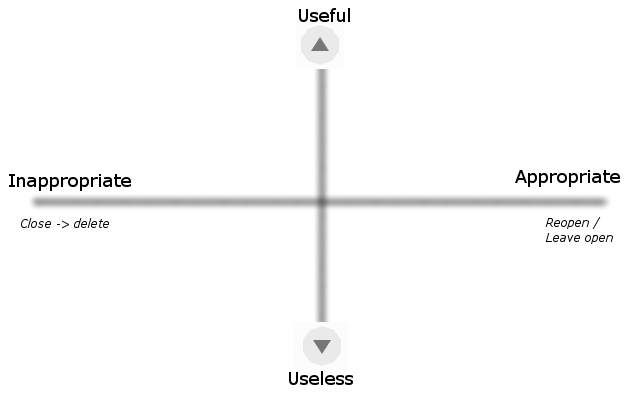 Closing a question - possible even if highly upvoted - makes it eligible for deletion and prevents answers from being posted, providing strong encouragement for improvement.

For answers though, there's only one axis: useful / useless. An answer with a positive score can't be deleted except through moderator intervention, and there's no equivalent to blocking answers for an answer; years ago we tried using Community Wiki as a "reputation denial" feature but this failed miserably - the closest thing we have today is probably locking, which prevents voting but also prevents both improvement and deletion.

The solution we arrived at on Stack Overflow was to simply discourage questions whose answers cannot be effectively moderated based on the single useful/useless axis. This solved the immediate problem*, but did so by pushing it off onto other sites: Software Engineering, The Workplace, Software Recommendations all allow or have allowed questions for which answers may be difficult to evaluate on a single axis and thus require manual intervention by a moderator in order to remove those that violate community norms.

Some other sites go even further in this direction, and impose rules on answers that may be difficult if not impossible for the average voter to apply. From the sound of it, this is the case for your hard-science tag.

A more thorough implementation might zero out the score and block further voting until the notice was removed; this would be a pretty significant change.

Until / unless such a thing can be implemented, it is critical that you establish your own protocol for enforcing rules that require consideration beyond up/down votes. For example, you might establish a process by which answers on notice are reviewed periodically and either de-noticed or deleted. Such a policy should be discussed here on meta and implemented by the elected moderator team if approved.

*I gloss over things like answers which recommend insecure or user-hostile practices here, but they're also problematic as they may be useful in solving an immediate problem at the cost of opening up much greater problems on down the road.

16
Do we need the reality-check tag?
18
Should we delete answers that don't meet the requirements of the hard-science tag?

9
What exactly is "Opinion Based" and why do we shun it?
38
Hard-science reminder on answering?
2
Is there a way to remove this bug related to the hard-science tag?
5
Hard-science tag, possible approach, changing how to ask these particular types of questions
9
Move good answers on a duplicate to the original question
5
Should this question have the hard-science tag?
1
Should certain tags automatically require answers to use SI Units rather than other, more traditional, systems of measurement?