What can we do to encourage questions?

Looking at our stats the one big thing where we could fail is not getting enough questions to bother keeping the site open. Our questions per day keep falling, and more and more of the questions we do get are being axed for various reasons.

Personally I think we need to try and help those questions that can be modified to meet Worldbuilding parameters more. We need to encourage questions, and encourage the formation of better questions. We don't want to discourage people.

I encourage you to look at the Area 51 statistics, which show this site getting 7.5 questions as of this morning. Even though the description says that's merely "Okay", the truth is World Building is off to a magnificent start. To give you an idea how betas normally progress, here's the questions per day timeline for Writers: 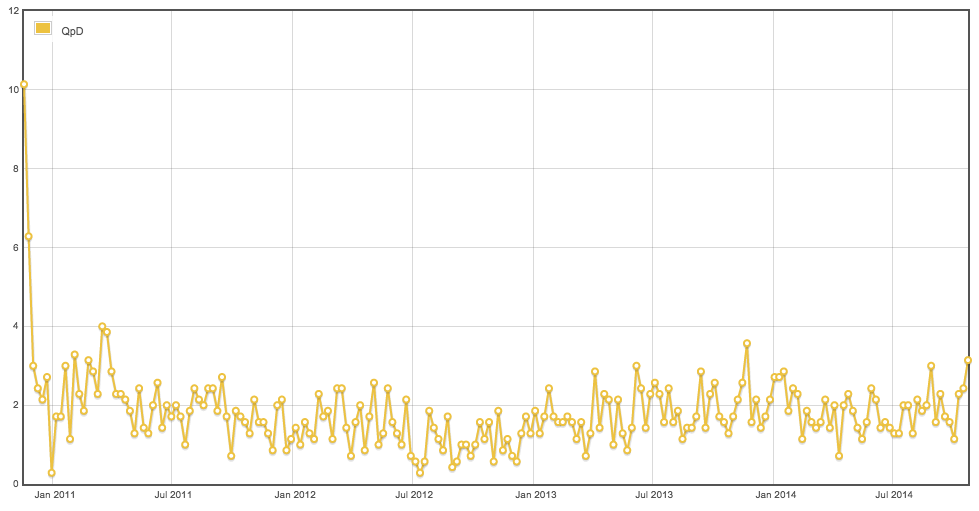 After private beta, enthusiasm naturally dropped off a bit. Here's the same graph for World Building so far: 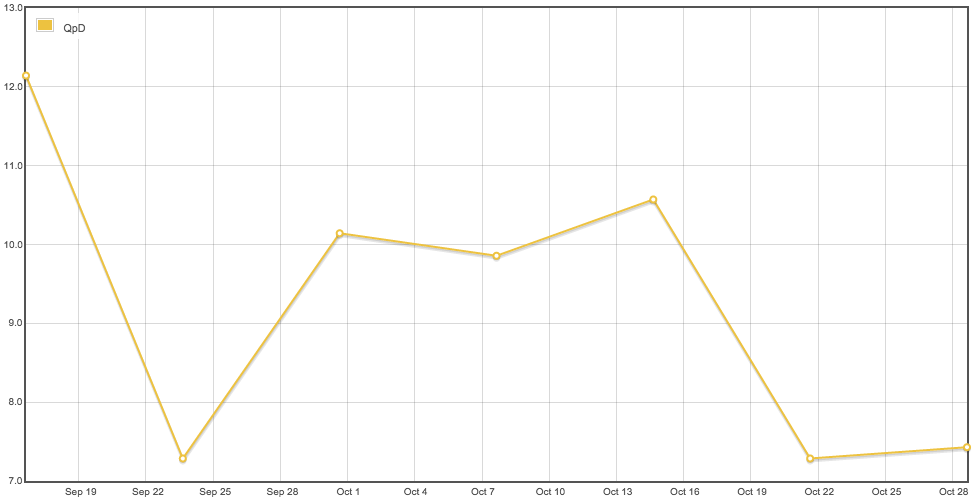 I draw your attention to the y-axis in particular which shows that in its 7 short weeks, this site has never dipped below 7 questions a day on a weekly average. That's a phenomenally fast start by any measure (other than Stack Overflow itself).

So while I'd normally be suggesting ways to move the needle on questions per day at this point in a site's life, I don't think participation and traffic are currently among World Building's problems. Rather I would suggest spending some time thinking about whether the site is headed in the right direction in terms of topic space and quality. (I haven't looked into those issues myself, so I'm not saying there's a problem here. Rather, if you have to worry about anything, those are the more productive things to think about.)

As a moderator I have access to analytics data that shows things like how many questions are being asked. There is a note asking me not to publish specifics (I don't know why but I'm not going to break that request without permission), however...

The number of questions being posted is not reducing.

However the first few days we had a massive surge of questions (over 30 on one day!) (several other days with quite high numbers too) which are now falling out of the averages causing it to look like numbers are falling.

It would be nice to see more questions, an upwards trend would of course be preferable, but there is no downwards trend. In fact this week we've had more questions on the corresponding days than we had last week, although the week before that was higher than either this week or last.

So please ideas for getting more activity are always welcome, but don't go into that thinking we are on some sort of downwards spiral :)

Looking at Analytics data (the specifics of which as Tim B mentioned cannot be shared in public), I do see a few trends.

We had a huge inflow of new questions right at the beginning of the private beta. That is expected, but depending on how the average is calculated, it also means that any more normal activity level is going to lower the average. The trend for answers is nowhere near as pronounced. On the whole, numbers of both questions and answers are holding relatively steady and have done so for a fair amount of time.

About 10% of our traffic comes from search engines, which I would argue is not bad at all for a site only a month into public beta. Only a few percent is "direct traffic", essentially meaning that someone typed worldbuilding.stackexchange.com into their web browser's address field. The lion's share of the remainder is intra-StackExchange traffic, which likely translates into people being curious about hot network questions.

We are holding steady as far as number of questions being closed, and see a slight uptrend in deleted answers. The former, together with the above, means that question closure is about as common as it has been. The latter is to be expected as the site attracts more traffic.

You have posted at least one question similar to this one before, a week ago now. Personally, I think you worry too much about relatively superficial statistics. Artificially inflating the number of questions won't be of any benefit to the site. Even a relatively low-traffic site can flourish if and only if the content is of high enough quality. If we end up posting questions just to post questions just to boost some average number of questions calculated over some unknown period of time, that is likely to lead to poor quality content which is likely to be a more important factor if the site were to be shut down. The latter which I currently can see no signs of being in the works in any way.

I think we could attract more answers if we could, as a community, find a good way to bend the Q&A pattern into more of a dialogue. I see a fair number of questions that look like "I know exactly what I want to ask, but I'm trying to be generic so my question is two sentences long." And a few "people are going to need to answer my question using only what I provide, so text wall!"

I know I, personally, am lured in by the possibility of my answer being accepted or upvoted a ton, so I find myself pressuring myself to answer quickly instead of drawing the author in and finding an answer together as opposed to throwing one at them.

I posit that the real reward of answering Worldbuilding questions is a chance to visit their world, and make it better. Any cultural shifts within the group which make that easier strike me as really good places to look.

1
Should we settle for an 'okay' number of questions per day?
2
Today we fell off the first page of 'Hottest proposals' at Area 51 is there anything we can do to get back on there?

14
End of beta soon?
30
Congratulations Worldbuilders - all systems green
1
Should we settle for an 'okay' number of questions per day?
43
Is Worldbuilding a What If Site?
9
Fortnightly Topic Challenge #28: Calendar
10
Educating New Users About Our Scope
10
Do we need the [idea-based] tag on Main?
12
Can we encourage people to put more research into questions?
10
How should we deal with inherently open-ended fishing-for-ideas questions?
12
Testing 3-vote Closures & Reopenings and the Value of Closing Questions