Why did my/all answers get the hard-science tag warning banner on this question?

In reference to Create gold or lead from other substances, all but the most recent few answers have been tagged with the hard-science warning. You all know it:

This question asks for hard science. All answers to this question should be backed up by equations, empirical evidence, scientific papers, other citations, etc. Answers that do not satisfy this requirement might be removed. See the tag description for more information.

I understand moderators manually add this notice to answers that do not meet the hard-science criteria, so unless there's a new script I'm not aware of (possible), a real-live moderator believed my answer didn't conform, right?

While I did certainly add some creative flair to my answer to address the soft aspects of the question, I'm confident that the meat of my answer (gold plating) was well supported by science, with links to relevant articles. I don't know how I could reasonably include more science without the answer being much, much longer, and/or not answering the spirit of the OP's question as well. What I could do is swap out the Wikipedia links for some more in-depth articles. In this case I chose WP because the specific article has the right amount of breadth for the question, in my opinion, but I'm not opposed to changing it if that's why it was flagged.

Since all answers older than about 5 hours old have also been flagged (as of this post), perhaps it's a new policy or script or something, but I quite like my answer and obviously want to make it fits the tags regardless, and doesn't get deleted at some point.

Does my answer conform to hard-science, and if not, how can I improve it?

As I wrote in a comment to this meta question, I was the one who added the post notice to the answers, roughly six hours ago.

First, we don’t use scripts. That’s extremely unfair, in my opinion, because it’s not easy for a script to figure out if a post meets certain criteria. There are exceptions, in the case of spam answers, but it’s much harder to evaluate whether a post needs a custom notice like this one. I generally check the hard-science tag a couple times a day to see if there are new answers, but sometimes I miss some. This is one of those cases, where a user flagged the question and noted that many of the answers needed the post notice; I took five or ten minutes to evaluate them and then did so.

Now, I don’t like subjectivity, because subjectivity leads to inconsistency, which is a bad thing when moderating. Sure, most moderation decisions are subjective, to some degree, but that can be mitigated. When it comes to considering adding this post notice to an answer, I like to follow a mental flowchart of sorts, based on information from the tag wiki and previous meta discussions. Here’s my impression of what it looks like: 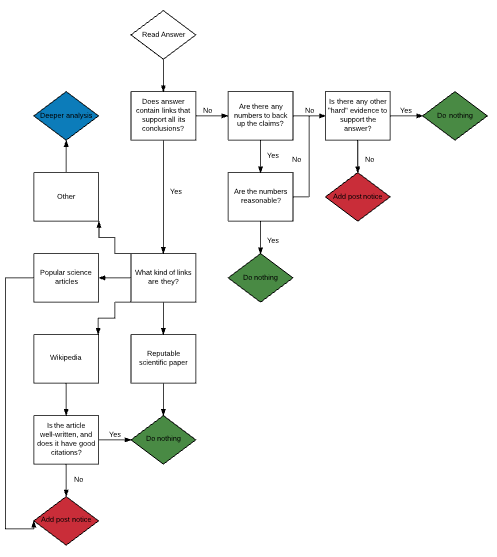 In your specific answer, I read the Wikipedia pages you linked to. The one on gold plating isn’t that well sourced, and the specific section that mentions acid gold plating is unsourced entirely. The one on mercury poisoning is much better, but the link doesn’t support any of your conclusions, though I find some of the cases amusing. Therefore, as per the informal flowchart - which I do, by the way, make exceptions to - I added the post notice on your answer.

I see your rationale for using Wikipedia as a source in general; in this case, I feel like it’s not enough. Normally, I would recommend replacing - or, better yet, augmenting - the link with links to the reputable sources the article uses for the specific point. For the article on acid gold plating, this isn’t an option, so I think you’ll have to dig deeper. I wouldn’t remove the Wikipedia reference, but I’d try to find some hard evidence to support the points that acid gold plating is possible with the technology of the alchemist. There’s not much else you need to do for the answer. It’s brilliantly simple, but the key to it should be backed up. With that done, you’re golden (pun intended).

The same basic rationale applies to most of the other answers here, and I’d argue that they can be improved in the same way yours can. Some involve more complicated arguments, and so more individual claims need to be backed up, but on the whole, the same issue applies.

For the record, unless things change in the future, I will never delete an answer simply because it doesn’t have enough hard-science. I brought that up from a neutral perspective in the meta post you linked to, and there was no clear support; thus, I see no reason to delete answers. I did delete one answer to the question you answered, but that was for a different reason: It was completely unrelated to the question.

I'll be a bit more specific by what I mean by "popular science", as Peregrine Rook asked about. If I had to define the term, I'd say

Any secondary source which reports on an unaffiliated scientific investigation and translates the conclusions there into something understandable by the average member of the public.

Well, that was a striking indictment of popular science writing, perhaps a bit on the harsh side. I'm primarily targeting online articles on places not normally devoted to science, or which generally only lightly dip into the actual science. News sites (e.g. bbc.com), general non-science sites (I can't think of a better term, but see e.g. wired.com), science sites that skim the real science (e.g. space.com or universetoday.com), and others all fall under this definition. Some are better than others - the last two are decent - but many are fairly terrible.

The definition excludes things like scientific journal websites. I don't mean vanity press sites; scirp.org has been cited in non-hard-science answers, and it's absolute crap. The same goes for viXra.org, founded by those who didn't like arXiv's (limited) peer review system. Even arXiv.org isn't always reputable; it doesn't have a full-fledged peer-review system, and I've seen terrible stuff there, though those are edge cases. Papers from proper journals, though - Nature, Science, etc. - are not popular science, obviously, and even lay articles on these journals' websites can be decent.

NASA's website (and, of course, other space agencies, although NASA's is pretty awesome) is not popular science if (and only if) the article focuses on work done by NASA scientists, or if it contains data from peer-reviewed papers. For instance, I recently wrote an answer on Astronomy Stack Exchange including data from this index, which is an informal repository of NASA's Kepler data. The ESA website has something similar for data from Gaia (with an awesome interface I'd recommend checking out).

Websites from institutions of higher education may or may not be popular science; it depends on whether the page is an article written for the university or college's general website or whether it's a page designed as part of a course for a specific department or as supplementary material. This is perhaps hard to explain, but it varies on a case-by-case basis.

Now for Wikipedia, which I grouped separately from popular science. Personally, I agree with Tim B's comment:

I think the main point here is that Wikipedia is NEVER an authoritative source on anything. It's a great reference and a good place to start looking but you always need to dig to the authoritative sources behind it. And be aware of https://imgs.xkcd.com/comics/citogenesis.png

I would advise, if you choose to start at Wikipedia, looking at the references it cites, while being clear to evaluate that those references are valid (checking that they're "reputable scientific papers", as they flowchart shows). I would not recommend using Wikipedia itself as a primary hard-science reference, only as a secondary one to explain a side term. That said, I feel that the community is a bit divided on this; that tag wiki even says (per ArtOfCode's suggestion)

Wikipedia is usually OK too.

I strongly disagree; even the best Wikipedia articles link to primary sources that are loads better. Take the time to read them and fully understand them; don't just be lazy and rely fully on a secondary source.

After you edited your answer yesterday, I removed the post notice from your answer, which now has a reference supporting exactly the part of the answer I felt needed referencing. I hope other answerers will do the same.

Not the answer you're looking for? Browse other questions tagged discussion specific-question specific-tag .

18
Should we delete answers that don't meet the requirements of the hard-science tag?
7
Defining the boundaries of the "hard-science" tag
6
Is "science-based" a meta- or otherwise-problematic tag?
5
Is "What land animal a large pack of trained war dogs can't kill?" a good fit for the site?
4
Collection of beginner tips thread?
2
How much should we accept Wikipedia (and similar sites) as a source?
2
Is there a way to remove this bug related to the hard-science tag?