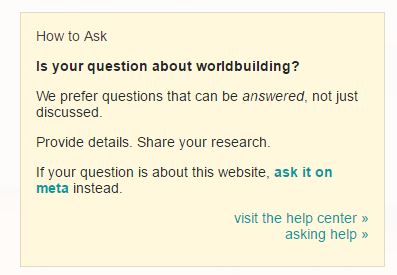 43
Is Worldbuilding a What If Site?
12
Checklist for the perfect post - Idea refinement
27
Worldbuilding Scope - Risk Factors
13
Understanding our double standard regarding some opinion based questions
9
Scope clarification discussions
2
Opening a direct link with an anchor breaks the layout

11
How can we get new users to answer old questions?
27
Worldbuilding Scope - Risk Factors
15
What the scope of Worldbuilding is NOT about
12
Checklist for the perfect post - Idea refinement
13
Understanding our double standard regarding some opinion based questions
7
What should be our commenting etiquette when pointing out that other Stacks exist?
14
Idea Refinement: Clarification and Examples of VTC Reasons for New Users
6
Seeking community advice/consensus on rolling back edits that invalidate answers
10
Should we downvote answers from new users?