Along the lines of Naming our robot, we should also try thinking up names for the other character on the poster, the Lady of Worldbuilding.

Same rule applies - one post, one name suggestion per person. 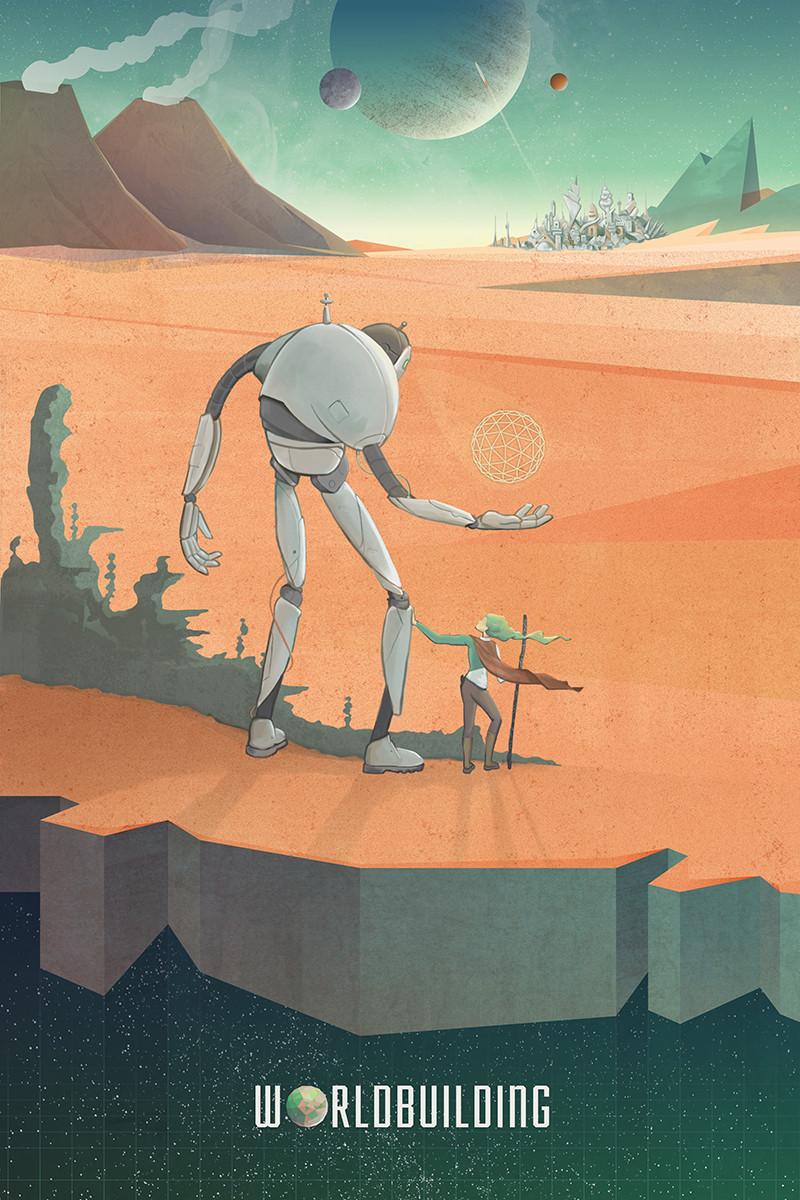 She was given a jar, and warned to not open it.

Perfectly in the curious spirit of a worldbuilder.

As a hat-tip to a brief series of questions I wrote a while back. I can see the scientific mage and her pet robot being a great force for good.

She just looks like a pixie to me, no reason beyond that :)

As our lady offers a refreshing design of the muse of epic poetry.

Its Latin for Earth afterall

Because nothing encompasses world building like an Iriquois creation myth. Giant turtles, birds carrying people, magic trees, and the beginning of humans.

First thing I noticed when I looked at her is that green, wavy hair. That remembered of the iconic creatures that fight for survival on a extremelly harsh world - The Lemmings. No, not the critter, but the game.

Still, that's what looks she is trying to do: surviving in a harsh world. She lost her friends and family, but came to know a nice, kind hearted robot.

And it's a new name!

I love the idea of using a character that has already been created by the users (I'd also love if the robot and lady become the protagonists of every hypothetical setting in questions!), but just to widen the pool a bit I thought I'd suggest the World Builder created by one of the greatest world builders ever:

For anyone not bothered to click the link, Kin Arad is the name of a character of Terry Pratchett's (in Strata) who is responsible for the construction of worlds. Seems apt :)

Note: I know there was brief discussion on avoiding any potential copyright issues, but I figure if anyone is going to be fine with it, it'd be the Pratchetts!

32
Naming our robot
83
Save The Robot!
17
What will we lose with the redesign?
5
Is it worth continuing the old name votes? If so, how?
2
Does someone have the source image of this site?
5
Site background image flicker

15
What should we have as our elevator pitch (name)
12
Are answers solely referencing novels/movies/etc. okay?
3
Questions about built worlds
32
Naming our robot
14
What should the name of our chat be?
11
Runoff voting for the name of our chat
5
Is it worth continuing the old name votes? If so, how?
6
Sandbox for Proposed Tag Edits
4
Our preferred capitalization for species names when they are Pokémon?
3
Policy proposal: Questions about names and the process of deriving names are off-topic